The ecommerce war between Amazon and Flipkart is spilling over to campuses with both trying to grab the best available young talent on offer, primarily from the Indian Institutes of Technology (IITs), Indian Institutes of Management (IIMs) and National Institutes of Technology (NITs).
They’ll be putting them to work on emerging technologies such as artificial intelligence (AI), big data, internet of things (IoT) and machine learning (ML).
With Flipkart in the process of being taken over by Walmart, early indicators suggest that it will run Amazon close, and perhaps even edge ahead, at campus recruitment this year. It’s going to more campuses and plans to hire more people in 2018 than it did last year. The company is making its debut in final placements at NIT Warangal, National Institute of Fashion Technology (NIFT), National Institute of Design and Faculty of Management Studies (FMS) Delhi, for summer placements.

“This year, we are expecting Flipkart to easily hire larger numbers from our campus due to funding from Walmart,” said a student who’s on the IIM Calcutta placement cell. “Students’ interest in these companies is quite high as they offer product development and operations roles.”

Flipkart is stocking up on talent it will need for the future.. 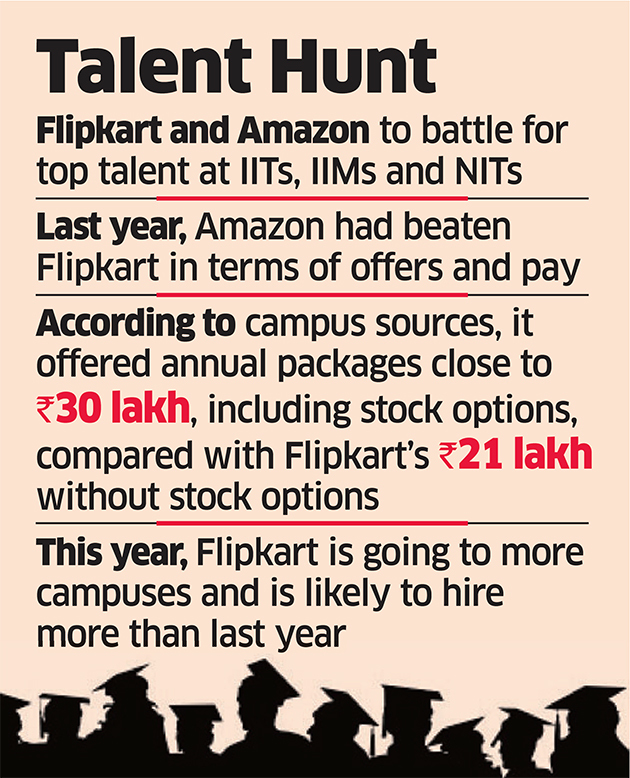 “Big data, machine learning, decision sciences and artificial intelligence will be the key focus areas for this season’s hiring plan — there is increasing need of resources in these emerging technologies,” a Flipkart spokesperson said in an email.

“These two companies have high brand value,” said a student member of IIM Bangalore’s placement cell. The school will be closing its list for summer placement in September and has already received feelers from both ecommerce companies.

IIT Kanpur starts its summer internship in August and its students with anticipation high for both Amazon and Flipkart, though there seems to be a preference for the latter.

“Flipkart being a smaller organisation offers a variety of roles to students compared to Amazon that has limited roles to offer,” said an IIT Kanpur student on the placement cell.

Last year, Amazon took the lead both in terms of number of offers and pay. According to campus sources, it offered annual packages close to Rs 30 lakh, including stock options, compared with Flipkart’s Rs 21 lakh without stock options.

“Amazon operates at the cutting edge of technology and we are keen to hire candidates with passion for technology such as AI, ML, IoT, speech recognition and computer vision, in addition to an aptitude to grow with the organisation,” said Raj Kaza, director, talent acquisition, India, Amazon.

Amazon’s campus hiring is higher for this year than 2017.

“University talent is a crucial source for attracting top talent for Amazon and we are committed to hiring bright talent from various campuses,” Kaza said. “The numbers for this year are 10% higher than what we have hired last year.”

Among the IITs, Flipkart is visiting Delhi, Madras, Kharagpur, Kanpur, Bombay, Guwahati, Roorkee, Banaras Hindu University (BHU), Varanasi and Hyderabad for engineering, product and business analytics profiles. Amazon is going to visit other top institutions in the country, including over 10 IITs that it has been going to in the past.

These companies see talent from IITs, IIMs and other leading institutes as being critical for growth.
“Our commitment to campus hiring is stronger than ever,” Kaza said.
“Internships have worked very well for us and we are increasing the share of pre-placement offers extended to interns. We have also increased the roles for which we hire from campuses.”
But the talent at top colleges is limited. At NIT Trichy and Warangal, there is already a rush of recruiters for the upcoming placement in August.
“This year, both Flipkart and Amazon would be visiting the campus,” said Ch. Venkaiah, head of the department of training and placement at Warangal. Last year, only Amazon visited Trichy and was one of the top recruiters at Warangal.
NITs are the first to begin their final placements in August, followed by new IITs such as Mandi and Ropar that start placements in October.
The older and better-known IITs begin their final placements in December.
At IIM Calcutta, both Flipkart and Amazon are visiting for summer placements beginning October. Last year, Flipkart made three offers, all final, at this campus, while Amazon made close to 18 — both final and preplacement offers (PPOs).
Share on LinkedIn Share
Share on Facebook Share
Share on TwitterTweet
Send email Mail
Print Print