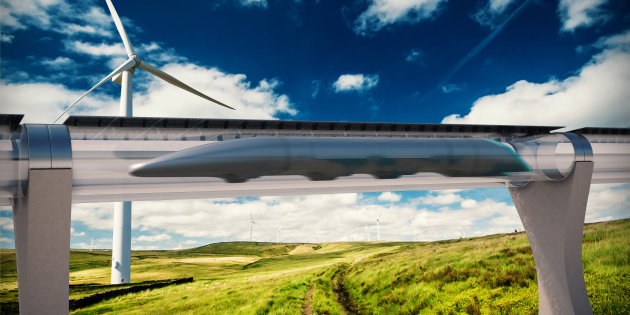 When Elon Musk talks about something, it is always a good idea to listen. More so, if he is talking about a futuristic transportation system. In August 2013, Musk presented a white paper on the Hyperloop technology which envisions moving people and goods at very high speeds inside tubes in capsules with the aid of linear induction motors and air compressors.

Hyperloop Transportation Technology (HTT) was the first company to jump on the bandwagon and began working on a Hyperloop transportation system that would be commercially viable. The company was founded in 2014 by Jumpstarter Inc.

HTT COO Bibop Gresta and Chief Global Operation Director of Middle East & Asia Joel Micheal are visiting India for the i5 Summit that will be held at the Indian Institute of Management, Indore. We spoke with them about Hyperloop, HTT, and India’s transportation system.

Hyperloop is a concept where transportation takes place in a tube. Think of a train propelled by linear induction motors in a high-pressure capsule. Theoretically, the speed of the capsule is 970 km per hour on an average, with the top speed of 1200 km per hour. So, imagine that you can travel from Mumbai to Delhi in under 90 minutes.

When people talk about HTT they assume that it is an Elon Musk company.

Yes, we get that a lot of times! Hyperloop Transportation Technology is a separate company. Sure, when we founded our company we went to Musk and talked about implementation possibilities and faults of the white paper he had produced. And it was a fruitful talk. He guided us on how to overcome challenges of a certain nature.

There is a lot of confusion regarding Hyperloop One And Hyperloop Transportation Technology. Your thoughts?

We are totally different from them [Hyperloop One]. We don’t want to do press events, or to have shows in the desert for demos. We are actually building a solution suggested by the Livermore Corporation years ago. We want to commercialise Hyperloop, not just present it as a science experiment.

They have been badmouthing us for a long time, claiming that they are the only Hyperloop company out there. They have great potential and this technology has a lot of space for the necessary competition. If they concentrate on solutions more, it’d be great.

How do you identify as a company?

We are a bunch of people collaborating. Rather than salaries we give stock options. And our investors are not just people who provide money. They can provide tools also. Software, hardware, test tracks, spaces anything.

Hyperloop Transportation Technology believes in collaboration. We don’t want to gloat about our investments. We want to work hard and make the world a better place.

In terms of implementation of Hyperloop, what are you doing?

We have a total of three centres where most of the research and test work is being carried out. More than 200 people are working in the US, Dubai, and in Bratislava in Slovakia.

AECOM is providing us engineering assistance to build our tracks. Our aim is to build a model of 8 km in Quay Valley, California. We are using Inductrack technology for our tracks which uses Maglev concepts.

What do you think of India and Hyperloop?

India is a very interesting country. It has a great railway network already. Hyperloop implementation would need a bit of modification but it is doable. And the technology is a perfect fit for the country as well. With a high population count, it makes more sense.

Optimum use of of Hyperloop would mean that a capsule would come to a station every 7 minutes. Each capsule has a capacity of 3,400 people. Imagine how many people a day can be transported every time.

Are you already considering implementation here?

Yes, why not. We are in talks with the Indian government, investors and other regulators. I think there is a great opportunity here. I met Prime Minister Narendra Modi when he visited Silicon Valley and the response was very positive.

Although, India needs a better infrastructure. The government needs to invest more into education and technology to improve that.

In the long run, the Hyperloop ecosystem is such that it will make a profit. So, it doesn’t need to be subsidised. Even private investors can put their money into it.

At the i5 Summit, you might make some investments. What kind of startups you are looking at?

Bibop Gresta: Right now our focus is on Hyperloop. So anyone who can provide us engineering or technical assistance will catch our eyes, be it in terms of software, mechanical, aerodynamics or even an idea that lives with the ecosystem of Hyperloop.

Joel Micheal: The i5 summit is one of the largest in India, featuring more than a 1,000 startups. We look forward to engaging with the vibrant startup community and entrepreneurial talent [so as] to have them join the movement in bringing the Hyperloop to India very soon.

Hyperloop is a costly technology to build, that will take a lot of effort. How do you think this will affect the environment?

The technology gives you back more rather than taking it. We rely on renewable energy and natural resources. Our plan is to use solar plates and wind energy. The landowner who would provide us space will gain in terms of clear roads and an ecosystem built around it.

What is the future of transportation?

Public transport will be much easier. We at HTT do a bunch of data mining to give suggestions to the government on how to improve customer experience while even earning money. We have carried out some projects in the US where if a cost of the ticket was $1, the government could earn $4-8 through ads and offers in the ticket booking app. And if the government can earn more, prices of tickets will be going down soon.

When can we see Hyperloop in action?

In February, we got our permission for our Quay Valley track. We have started the environmental study and within 30 months we will see something great taking place. I am sure that within a decade we will see many commercial Hyperloop implementations.