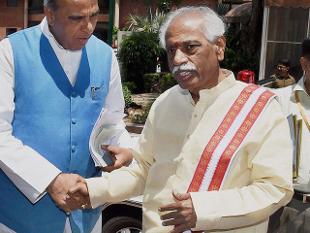 The Lok Sabha on Tuesday passed The Employees Compensation (Amendment) Bill, 2016, as Union Labour Minister Bandaru Dattatreya said a large number of workforce in the organized sector will benefit.

The bill provides for higher compensation in case an employee is injured in industrial accident and has a provision for hefty penalty in case of violation by employers, officials said.
“A large number of organized workforce will be benefited by it…. Labour is a big component in the nation-building activity as their participation is very high. India has got a huge human resource. That is why labourers or workers play a significant role in building the nation,” the minister said while piloting the draft legislation in the lower house of Parliament.

At the end of the debate which saw participation of several members, Dattatreya said said the new legislation provides for payment of compensation of Rs 50,000 to Rs 1 lakh to employees and their dependents in case of injury in industrial accidents and also occupational diseases.

Besides, Rs 50,000 compensation, there will be “penalty for failure to display the Act” by the employers.
Under earlier provisions, the compensation amount was modest Rs 5,000.
“We are increasing the penalty from Rs 5,000 to Rs 50,000,” he said, adding, “wherever an establishment or factory is there, they have to display the Act in Hindi or English or in regional languages for the information of the workers”.
The bill was passed by a voice vote even as the minister assured members of steps to ensure protection of jobs, wages, social security and fair wages to workers.

Dattatreya said the National Democratic Alliance government has been “pro-worker”.

Kodikunnil Suresh of the Congress, however, argued that the compensation amount was too less.

He said: “With the present rate of inflation, with the cost of various goods and services being high, can this compensation be called a compensation?”
BJP member from Rajasthan, Dushyant Singh, called the bill path-breaking and said Prime Minister Narendra Modi deserved to be commended for the proposed legislation.
For the first time, he said, interests of industrial workers had been addressed properly.

“This has happened for the first time. This is to uplift the aam aadmi (common people), which was never there before under the previous government,” he said taking a dig at the Congress.

Pratima Mandal (Trinamool Congress), who was among those who supported the bill, said the employees working in coal mines and iron factories “also need preventive measures” in case of accidents.