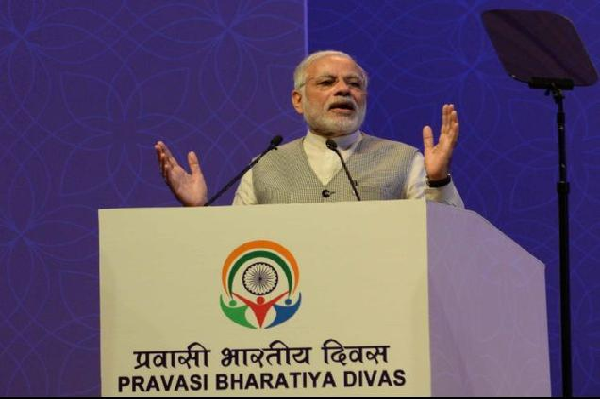 corporate News
January 9, 2017 executivesearch 0 Comments "Pravasi Kaushal Vikas Yojana, Pravasi Bharatiya Divas, Pravasi Bharatiya Divas 2017
Share on LinkedIn Share
Share on Facebook Share
Share on TwitterTweet
Send email Mail
Print Print
Prime Minister Narendra Modi on Sunday said the government will shortly launch the Pravasi Kaushal Vikas Yojana (PKVY) which is aimed at skilling Indians seeking employment abroad. The prime minister was speaking at the 14th Pravasi Bharatiya Divas Convention in Bengaluru.
“The Pravasi Kaushal Vikas Yojana is targeted at Indian youth seeking overseas employment,” Modi said.
PKVY will train and certify Indians, who are keen on overseas employment in select sectors, in line with international standards. It will be implemented by the National Skill Development Corporation through its training partners and in consultation with the Ministry of External Affairs and the Skill Development Ministry.
“We will convert brain drain to brain gain with your cooperation,” the prime minister said.
Appreciating the efforts taken by External Affairs Minister Sushma Swaraj, Modi asserted that “welfare and safety of all Indians abroad is our top priority”.
“The welfare and safety of all Indians abroad is our top priority. Their security is of utmost importance to us,” the prime minister said, adding, “Sushma Swaraj has particularly been proactive and prompt in reaching out to distressed Indians abroad using social media.”
Modi also underlined that Non-residential Indians and Persons of Indian Origin (PIOs) have made outstanding contributions to their chosen fields.
“Indians abroad are valued not just for their strength in numbers. They are respected for the contributions they make,” he said.
“Remittance of close to sixty-nine billion dollars annually by overseas Indians makes an invaluable contribution to the Indian economy,” Modi added.
The prime minister encouraged all PIO Card holders to convert their PIO Cards to OCI (Overseas citizen of India) Cards and highlighted the new initiatives launched by the government.
“We have extended the deadline for PIO card conversions to OCI from December 31, 2016, until June 30, 2017, without any penalty,” Modi said.
“From January 1, 2017, beginning with Delhi and Bengaluru, we have set up special counters at immigration points for OCI cardholders,” he added.
Modi also said that starting with Mauritius, the government is working to put in place procedures so that descendants of Girmitiyas could become eligible for OCI Cards.
“We remain committed to addressing similar difficulties of PIOs in Fiji, Reunion Islands, Suriname, Guyana and other Caribbean States,” Modi said.
Girmitiyas, or indentured labourers, are the generations of Indians who left the country in the middle and late 19th century to serve as labourers in the then British colonies where they eventually settled down.
Portuguese Prime Minister Antonio Costa and Suriname Vice-President Ashwin Adhin were also present at the event.