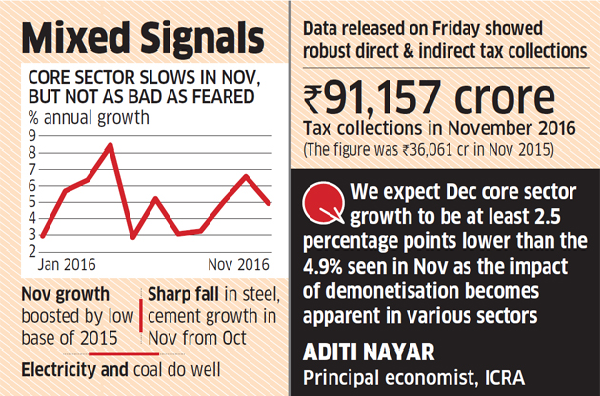 The first official production numbers following the November 8 demonetisation suggest the impact of the measure was not as severe as feared that month, but two other sets of data indicate a turn for the worse from December. One indicates that manufacturing contracted for the first time in a year in December while the other points to greater wariness on the part of investors.

Core sector output rose 4.9% in November on the back of a strong expansion in steel production and electricity generation, though the pace is down from 6.6% in October, data released on Monday showed. Part of the buoyancy was due to the base effect of lower 0.6% growth in November 2015. The eight industries that make up the core sector — coal, crude oil, natural gas, refinery products, fertilisers, steel, cement and electricity — have a 38% weightage in the index of industrial production (IIP), suggesting that overall factory output may not have been tripped up by demonetisation in November.

That’s backed up by data released on Friday showing robust direct and indirect tax collections. The government said that showed the economy had not suffered because of demonetisation. To be sure, there’s been a sharp dip in growth in cement (6.2%) and steel (16.9%) output from October. “There is some slowdown impact on construction as both steel and cement have begun taking a hit, which is partly because of demonetisation,” said Kotak Mahindra Bank economist Upasana Bharadwaj.

Aditi Nayar, principal economist at ratings firm ICRA, said, “Construction and real estate are cash-intensive both from the purchase side, with a portion of transactions involving cash, and also because daily wages would to a large extent be paid in currency notes. So, the impact of demonetisation is seen in the performance of key inputs like cement and steel.”

Economists expect the full impact of demonetisation to be visible in the December numbers, which will be announced on January 31. “We expect December core sector growth to be at least 2.5 percentage points lower than the 4.9% seen in November as the impact of demonetisation becomes apparent in various sectors,” Nayar said. However, coal output bounced back into positive territory in November after three months of contraction to post 6.4% growth.

Electricity generation rose 10.2%, and steel production was up 5.6%. Cement posted a modest 0.5% output growth while refinery products and fertilisers were up 2% and 2.4%, respectively.

Overall, April-November core sector growth was up 4.9% against 2.5% last year. According to government data, November 2016 tax collections added up to Rs 91,157 crore, a sharp increase from Rs 36,061crore in the year-earlier month. “Of course there would be areas which would be adversely impacted, but what was predicted by the critics has to have a rationale with revenue collection,” Finance Minister Arun Jaitley had said on Thursday, citing the tax numbers. “Assessment can be unreal but revenue is real.”

Two separate data releases on Monday indicated that the effects of demonetisation may take a harsher turn from December. The Nikkei India Manufacturing Purchasing Managers’ Index fell to 49.6 in December from November’s 52.3, the first contraction in the past 12 months. It’s also the biggest monthly decline in the index since November 2008, the start of the global financial crisis.
Both the output index and the new orders index sank to their lowest for the year. Separately, data compiled by the Centre for Monitoring Indian Economy (CMIE) showed new investment proposals worth Rs 1.25 lakh crore in December quarter. “This is low compared to the average Rs 2.36 trillion (Rs 2.36 lakh crore) worth of new investments seen per quarter in the preceding nine quarters of the (Narendra) Modi government,” wrote Mahesh Vyas, CMIE managing director.
“Data suggests that demonetisation has hit the pace of announcement of new investment proposals during the quarter ended December 2016.”