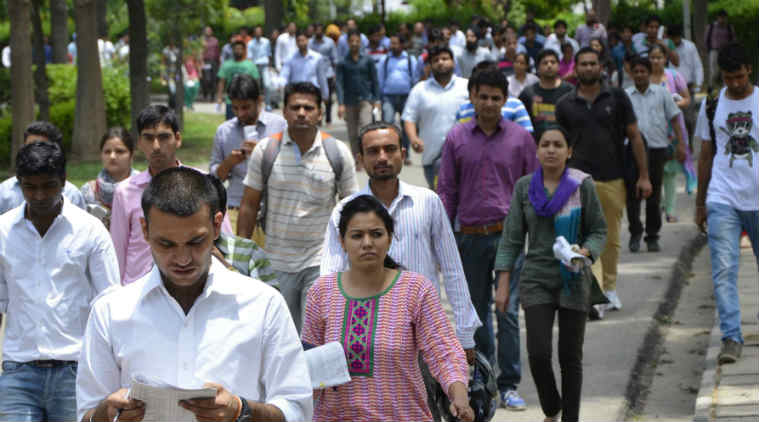 The last quarterly survey by the Labour Bureau showed that India has never created so few jobs, since the survey started in 2009, as in 2015: Only 1.35 lakh jobs compared to more than nine lakh in 2011 and 4.19 lakh in 2013 in eight labor-intensive industries (the only ones that are surveyed).

These figures are particularly alarming since almost one million new people enter the job market every month. As President Pranab Mukherjee said last month, “The Indian economy today needs to generate 115 million non-farm jobs over the next decade to gainfully employ its workforce and reap its demographic dividend.” That is not the direction in which India is going.

This jobless growth, which has been more dramatic in the last two years, is probably the main issue of the Indian economy today. It is largely responsible for demonstrations by young Patels of Gujarat and Jats of Haryana in the name of reservations. Since they can’t get jobs in the private sector, they fall back on government jobs. But the public sector is shrinking: Government jobs, which were 19.5 million in 1996-97, are about 17 million today. Not only are jobs fewer than before but those that are created are precarious and badly paid because of the informational of the economy. In fact, the share of registered manufacturing in employment peaked in 1984.

Jobless growth may be explained in many different ways, but two factors in particular need to be highlighted. First, India has an employ ability problem. While the services can rather easily recruit skilled white-collar workers (IT engineers, English-speaking people for the call centers, etc), the industry cannot transform peasants into factory workers so quickly. Such a transition requires basic training, which is missing. The 2015 Economic Survey assessed that “6.8 per cent persons aged 15 years and above are reported to have received/ be receiving vocational training”. These data reflect a larger problem: Primary and secondary education, where the dropout rate remains very high, provides a poor education.

In this context, the minuscule increase in the share of education in the 2015-16 budget, from 3 to 3.1 per cent, will hardly make any significant difference. The fact that the government seems to rely on private initiatives in this domain also stands in stark contrast to an obvious reality: No country has developed without a robust public education system.

The second factor that needs to be pointed out pertains to the small and medium enterprises (SMEs). Their labour intensity is four times higher than that of large firms. The multinationals are particularly capitalistic, as evident from the commitments/ promises expressed during the last “Make in India Week” in February. While the investment commitments were impressive at $225 billion over five years, the fact that they would translate into the creation of 6 million jobs only was not trumpeted. In fact, the Make in India programme is revealing of the jobless growth syndrome: Highly capitalistic multinationals will start factories in India to sell their products to the white-collar middle class but will not create the manufacturing workforce the country is longing for.

First, they have poor access to credit. According to Ram Jass Yadav’s survey, “Issues in SME financing”, “approximately 95 per cent of units still require to be brought into banking fold”. As a result, they get a small share of the net credit of India’s domestic banks, whereas these banks are mandated to register at least 20 per cent year-to-year growth in credit to micro and small enterprises. Instead of increasing their loans to SMEs, public banks are asked to lend money to big companies.

Second, the SMEs are badly affected by the erosion of state protections which harked back to the Gandhian era. After Independence, cottage industries benefited from a form of positive discrimination: Hundreds of items were reserved to them. Neoliberals criticized this infringement on the law of the market. Last year, The Economist hailed the decision of the Union government to remove this “absurd” system in the case of the making of furniture. But the new policy may be more absurd if it results in the replacement of carpenters by machines — that highly capitalistic big companies will import from abroad, on the top of it. Incidentally, that was one of the dimensions of the Nehruvian model that the Bania-oriented Jana Sangh of the 1950s-60s had approved of, under the aegis of Deendayal Upadhyaya — a great promoter of SMEs. But the BJP relates to the business world in a different manner, at least since the Pramod Mahajan years.

Third, the big companies are also the main beneficiaries of the fiscal policy of the government. The total amount of tax exemptions represent Rs 5,50,000 crore in the 2015-16 budget, including Rs 1,84,764 corer for Central excise duties and Rs 3,01,688 crore for customs duties. The big corporate houses, which have sometimes also established their own SEZs, largely profit by this infringement on the law of market.

The rationale of crony capitalism is the same all over the world: Those who pay for electoral campaigns and who command other forms of influence can somewhat dictate their terms, even if this balance of power results in distortions of the market economy — and the creation of fewer jobs.