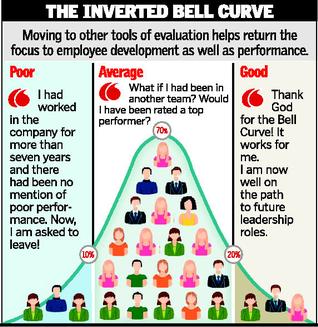 The Bell Curve method of employee assessment, seen as being too rigid and sometimes unfair, is losing popular appeal

Last year, when there were reports of mass sacking of employees in one of the leading IT service companies in the country, there were protests in Bengaluru, among other locations. A major reason cited for the action, among industry watchers, was ‘non-performance.’ . When employees were asked about the reason for the mass sacking, they had unanimously pointed to the ‘unfair’ practice of performance assessment system followed by the company.

“I had worked in the company for more than seven years and there was no mention of poor performance in my appraisal report. Despite that they asked me to leave the company,” an employee told The Hindu.

This is not a problem just in a company or in one sector, but across industry.

For the head of any HR department, the challenge lies in bringing about a clear and transparent system of assessment. There are many sets of assessment practices used by corporations. However, one that had earlier been widely accepted and practised, globally and in India, is the Bell Curve method of employee work assessment. And that, is the going out of favour with Indian employers !

How does it work? Employees are rated and given a score. Then, every score is plotted on a graph against the number of people in the team that have obtained that score. Typically, a chunk of team members is clustered around the middle, with top performers and the laggards making up either extreme. Visually, this seems takes the shape of an inverted bell.

According to HR experts, the Bell Curve was initially established by General Motors in the US for accessing customer satisfaction, but later on assumed as a tool to access employee performance. The big advocate of the system for employee assessment was General Electric (GE) and the US major had intensely advocated it under the leadership of then CEO Jack Welch.

The Bell Curve methodis seen as one with a rigid framework that forces a manager to slot at least some in his team as poor performers.While they may not been shown the door immediately, there is always that threat hanging over their heads.

“In the early days, the Bell Curve was welcomed by many employees in the West as it gave many an opportunity to be identified as leaders thus giving their career an impetus., said Suman Nair, Director at Atiitya Training & HR Consultants. “However, when more organizations opted for it, there was no proper education for users of the system. The system always demanded a manager to identify a certain per cent of people in his team as non-performers and normalization was the word used,” she added..

In the recent past, the practice of this system of assessment has seen acceptance shrinking. For example, GE itself has decide to move away from the Bell Curve method, opting for a less rigid system with frequent feedback.

In the past couple of years, other majors such as Google, Microsoft, Adobe and Accenture have also moved away from this system. Taking a cue from the West, many Indian firms are working on other methods of employee assessment and are turning their backs on the old method.

The changing nature of work, newer business models and the need for highly nimble responses to client requirements resulting in the need for frequent engagement with employees is driving this shift.Take for example, the latest Indian entrant into this group – Wipro Ltd. The Bengaluru-based company, which recently appointed former TCS executive Abid Ali Neemuchwala as the CEO, is revamping its employee assessment system by scrapping the ‘Bell Curve’ methodology across various bands in the organization. In the new model, the company is giving greater weight age to the inputs of immediate supervisors of employees it is grading.

Wipro’s competitor and India’s second largest IT exporter, Infosys, had also moved away from the relative ranking method to an absolute ranking process in September 2015.

According to Infosys, in today’s context, it is impossible to relatively compare employee performance since each individual now works on a variety of incomparable tasks. Another reason cited by the company to move away from the model is that the relative ranking process was not in line with the business’ and employees’ needs.

“Today, there is also a need to move away from “point-in-time” feedback and practice continuous feedback.”said ,” said Richard Lobo, SVP & Head-HR, Infosys Ltd. According to him, the company’s new process, “therefore, helps us bring back the focus on ‘performance and development’ conversations between the manager and team members where the employee’s future development is given as much importance as the past performance.”

In other words, in a team of 50, what if 30 of are actually excellent performers and truly deserved to be graded at the top? And what if none of them is a ‘poor’ performer?Another problem cited in the system is the failure of employees and their supervisors to remember or present all their achievements during the annual appraisal as the process occurs only once a year. Experts also say that many organizations have a set up evaluation processes but very few consider the importance of conversation and dialogue to reach a decision the employee’s rating.

Though some major players such as Infosys and Wipro have moved out from the Bell Curve in a move to improve engagement practices, there are many players who still follow the system. For example, companies like Tech Mahindra, Toyota Kirloskar, TCS and Bosch Ltd still find value in using the Bell Curve system for appraisals.

When asked about the issues faced her, a spokesperson for Bosch Ltd, the auto-components major, said, “Since the Bell Curve mandates a relative assessment, there are chances that employees rated as low performers, may not be genuine low performers. This could be an approximate of 5 per cent of the employees.”

Industry watchers say that the ranking of team members as poor performers has been, more than just occasionally, used to reduce headcount in the company. It is common to see, after each appraisal cycle, the number of employees leaving organizations going up a wee bit..However, there are differences of opinion about it the use of the Bell Curve method– whether to reward or to punish. “This method was used by many in the US to reduce headcount, but not so in India. Traditionally, in Indian IT companies the attrition has been in the range of 14-15 per cent,” said Kris Lakshmikanth, Chairman & Managing Director at The Head Hunters India. In other words, IT companies have wanted to retain more people than actually left the rolls.

Despite the negative impact that it had on those tagged as poor performers, the tool has been considered an asset in identifying future leaders of the organization. It has also provided the option to many employees to explore various avenues in the organization based on their interest and skills.

“When we blame the system for its negative factors, it has some positive angles too. I believe that many leaders in companies were selected using the Bell Curve system,” said Ms Nair of Atiitya Consulting.